The chickens of the former PLP Government coming home to roost!. 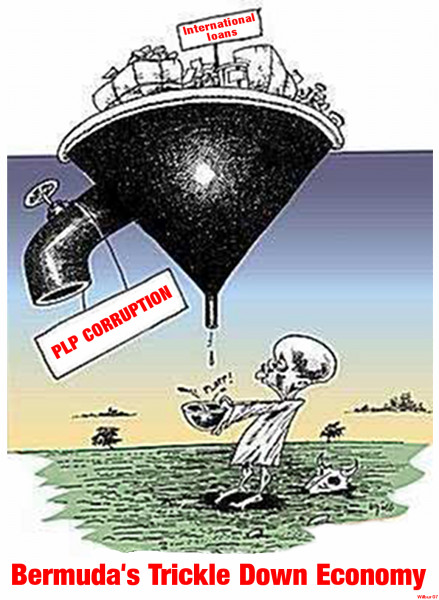 Fitch downgrades Bermuda; outlook to negative!
a terrible legacy:By Brian Duperreault SAGE Commission:This year, the Bermuda Post Office is estimated to lose $8.9 million; Marine and Ports, which operates the ferry service, will lose $12.4 million; and Public Transportation, which operates the bus service, will lose $12.9 million.  As of March 31, 2012, Government was owed $204 million in taxes and fees...
Bermuda’s financials :For thirty-eight months, between October 2010 and December 2012,the PLP government spent vast amounts of time and energy creating financial untruths

Bda Inc. is BANKRUPT!
We're a banana republic with no bananas !
The chickens of the former PLP Government coming home to roost!.
Government last night rushed through legislation allowing it to borrow an additional $1 billion
saying it needed to act quickly before it ran out of funds!
That would have left us with a shortfall of around $70 million,
which meant that we would have been unable to pay essential government
costs such as payroll at the end of the month.”"
Slump fuels loans crisis : one in ten loans,including mortgages,are in arrears

Moniz and Burgess clash over reference to BLDC payout to Pastor Leroy Bean .Jackass burgess, de donky retard’s spokesman, as usual turns the House of Assembly into a gutter with his vulgar mouth. It is always the thief, caught in his lies & deceit, who makes the most noise!
Vermin, like Burgess, rule the world, they do so because people refuse to cast avarice out of their hearts. Bermudians are going to have to learn to see greedy plp liars & thieves as the criminals they are and stop making excuses for this thuggish BIU-plp behavior. The churches and institutions should condemnation the corrupt thievish plp antics of "Pastor Leroy Bean”
Where are rest  plp gangstas? Erat brown has mansions all over the world, “Dame” Jennifer, Cog, Lister,set for life, retired to Caribbean  ,or Florida, millions in  the bank, plus generous pensions for life thanks to suffering taxpayers. 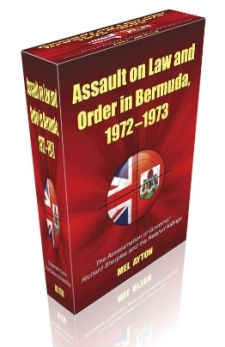 40 years ago today March 1973 : assassinations of  Police Chief and Governor

Mel Ayton's   Assault on Law and Order in Bermuda: book charges the PLP with inviting “radical” speakers to Bermuda to deliver “ideologically-biased versions of black history and culture”

During the 1970s, a black power organization in Bermuda conspired to bring about social change “by any means necessary,” including assassination. This is the first full account of the murders and the Black Beret Cadre, the revolutionary group whose activities resulted in mayhem throughout the island.
those implicated in the incident, include former Attorney General Phil Perinchief, Ottiwell Simmons jr, former Premier Jennifer Smith, Mel Saltus, Bobbie Greene and Charles De Shield.

In 1972 the Black Berets began to compile a “hit-list of the Bermuda ‘pigs’ ” they intended to execute. They also began to stockpile weapons including pistols and shotguns
-  Tacklyn had fled Bermuda after the assassination with Black Berets Ottiwell Simmons Jr. and Charles De Shields.
-  The Scotland Yard files do not simply infer a conspiracy to murder the Police Chief and Governor. They actually name a third person, the son of a powerful Bermudian politician, as a participant who was directly involved in the assassination
-  Black Beret leader John Hilton ‘Dionne’ Bassett had been seen practice firing a .38 revolver, the same type of weapon used to kill the Governor.
-It would behove black leaders like Jennifer Smith, a former Premier, to cease characterizing the Black Beret Cadre as “freedom fighters”.
"Following the racial turmoil of the 1970s Bermuda's social, political, and economic institutions remained relatively stable but the increasing prosperity of Bermudians did not prevent Bermuda from suffering the same fate as most western nations ~ fatherless children, degrading educational standards, high prices for even the basic of existence, burgeoning and increasingly violet crime and growing sense of fear for the future.
"Since that time the island has been awash in cocaine and heroin and during the late 1990s the new PLP government did nothing to effectively stem its tide or the corruption and crime. As the Mid- Ocean News observed, "The widely publicised looting of the Bermuda Housing Corporation coffers, the multi-mullion-dollar Berkeley Institute boondoggle, the grace-and-favour terms of the Coco Reef lease and the widening pension fund scandals leave little room for doubt there's more corruption in Bermuda's Government than you'd find in the average graveyard."

Lister proud of Wedco legacy: what a pile of ignorant BS, Lister has taken the millions he pocketed back to his St Kitts home.Dockyard  cannot handle tourist & moving ships from Hamilton has crushed both Bda Tourism & Hamilton.Political parasite Lister,never had a real job in his life,except race pimping for plp thieves,the  Pigs at the trough, from lining his & his plp pals pockets to the Heritage Wharf fiasco, OBA is now studying legal action against contractors Correia Construction:

Legal action against contractors Correia Construction: This is just the TIP of the iceberg of Ewart Brown's corruption,PAY-TO-PLAY kickbacks,looting & thievery by the plp since 1998

PLP=‘PRIVATE PROFIT MACHINE’:When is Erat brown & plp thieves going to be jailed for their 14 yrs of thievery & corruption? 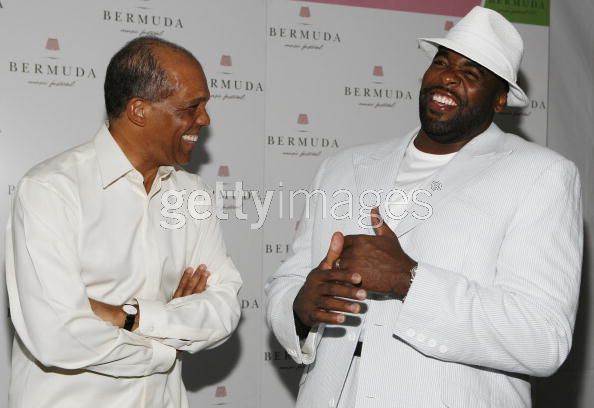 Erat brown's pal Former Detroit Mayor Kwame Kilpatrick,was convicted today of a raft of crimes, including racketeering conspiracy, which carries a maximum punishment of 20 years behind bars. He was portrayed during a five-month trial as an unscrupulous politician who took bribes, rigged contracts and lived far beyond his meanswhile in office until fall 2008.

This is the BIU/PLP game plan, Create chaos, a General Strike.Force an election, desperate to bring BIU/PLP back to power.

WILDCAT STRIKE Marine & Ports staff shut down ferrys."Christ Furbert sabotaging Bda Inc. yet again, it’s not just tourists & locals,  Marine & Ports staff are some of the laziest do nothing parasites on TAXPAYER'S PAYROLL .Stop the complaining and get to work! privatize public transportation!! .plp-BIU race baiting & strikes have murdered tourism,CEO's & investors are watching, keep stirring the pot, and even More IB will disappear, with good paying jobs.

Threats to free speech legislation against attacks behind pseudonyms on blogs, talk radio and in newspapers.
So much for truth about race .What's next burning books & newspapers?
OBA are a new govt. and want to STAY in power, they will pander to the race pimps & ensure it remains a profitable cottage industry The Plp-BIU's vindictive,spiteful race baiting  & strikes have murdered tourism, and  destroyed Bermuda ! CEO's & investors are watching, keep stirring the pot, and even More IB will disappear,Bda Inc. will end up bankrupt same as Jamaica, & Detroit !

Ombudsman to investigate City Hall!OBA will need to bring in UK forensic auditors & a Royal Commission, to dig through the past 15 yrs. of plp corruption. Deputy Mayor,Donal Smith, Erat’s cousin, who now want to pay themselves hugh salaries,now refuses to co operate with Ombudsman!
Controversial Healthcare Partners Ltd  could be dissolved soon, The Royal Gazette has blocked comments, again ,from fear of Erat Brown using legal system to prevent the truth about his & plp institutionalized corruption.Another reason the Scotland Yard & a Royal Commision inquiry of corruption need to begin digging into Erat Brown &  Bda Hospital Board finances.
plp achieved what the Black Beret revolutionaries of 60s did not do:they stole,raped,pillaged Bda Inc. into bankruptcy!
Bean overruled DAB in favour of PLP colleague, PLP Senator Marc Daniels ,who was  granted Planning permission for a five-storey, Apt block, on protected land 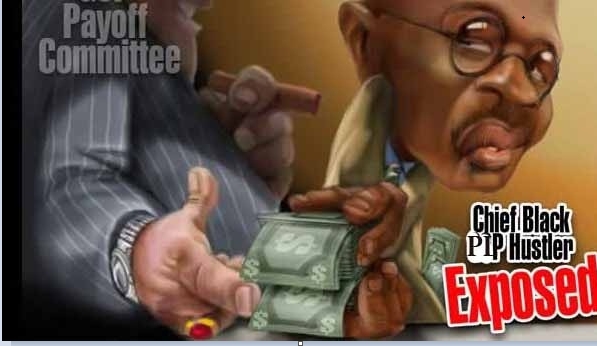 Deputy Mayor Donal Smith ,Erat brown’s cousin, & front man (AKA Mayor in waiting, once they get rid of Graham Outerbridge) another racist carpetbagger who lined his pockets under plp- Erat brown  era, getting under the table contract for govt services, TCD emissions company bldg. etc.  He is a Trojan horse, for Erat brown’s friends & family to erect a gambling casino in Hamilton. The Ombudsman is investigating, but that’s not enough. What’s needed is for UK to send Scotland Yard to uncover 15 yrs. of  plp entrenched corruption, that has ruined Bda Inc.

fitness studio Curves,goes out biz,another victim of plp term limit suicide.number of jobs on the Island has fallen from around 40,000 to 35,000 in the last five years!
PLP's legacy: 'A bloated budget, thousands of jobless, unsafe neighbourhoods'
Premier Craig Cannonier  we were close to not being able to pay our bills as a Government – this is something we inherited.: Frightening what's been happening to our economy':
S&P revises Bermuda’s outlook to ‘negative’Bermuda’s credit rating could be downgraded should the Island fail to turn its economy around.
2,000 jobs lost last year.
Bermuda’s unemployment rate has almost doubled in the past three years: but the Actual rate has to be double this estimate ,at least 20-25% ! Debtors’ cars ,Taxis,motorbikes parked in compounds around the island seized by banks 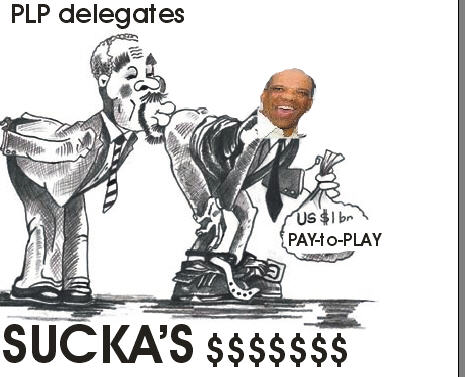 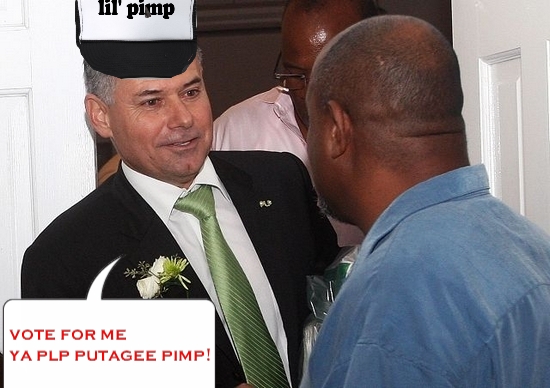 The UK has made it clear that the Uighurs are Bermuda's problem to solve. Erat is grinning, after he created a problem, then dumped it on the OBA to sort it,while he & PLP retire wealthy & satisfied leaving the Island in a mess, after filling their "snouts" at the TAXPAYER’S trough!!

Ignoring the elephant for the mosquito: Bermuda’s public debt ! at least $171 million annual interest charges.
Corrupt Hospital scam set up by plp &  Erat Brown to be scrapped!Bermuda Health Advocacy Group accused hospital bosses of trying to sweep previous controversial decisions and practices under the carpet...$175,000 review of the Island’s hospitals has been branded a complete waste of money !
The big ugly facts of debt spending:Huge increases are on the way with payment due on the hospital in 2014.Government will borrow 31c out of every dollar ,will soon balloon to 40c ,it predicts no real growth in revenue in 2014, BUT there will still be at least a $27 million jump in Government’s overall costs.This insanely high level of borrowing began nine years ago in 2004. Unchecked and unstopped, it’s now dangerously high.
BIU_plp continue to sabotage OBA & the economy:arriving yacht crews felt ‘unwelcomed’

When pigs fly over the sound ! Morgan’s Point resort first phase could open in 2016:for some background:How plp gov't communists & shakdown artists destroyed Bermuda tourismBermuda author Don Grearson USS Bermuda – The Rise and Fall of an American Base : The meeting where the Morgan's Point dream died ...
Dire warning that pension crisis could sink Bermuda:Government's own pension is underfunded by over a billion dollars.Gov’t spending must fall for OBA’s plan to work
Tags: bermuda is bankrupt!, former plp government corruption
Subscribe
Comments for this post were disabled by the author