Fat boy Judas Jam heel, needs to chill, what time does Lickin Chickin open?.......fatso's a  wannabe Sharpton,he needs a grease refill PLP spokesman Jamahl Simmons resigns over offensive tweets :shooting people in the back of the head and burning down Bermuda ! 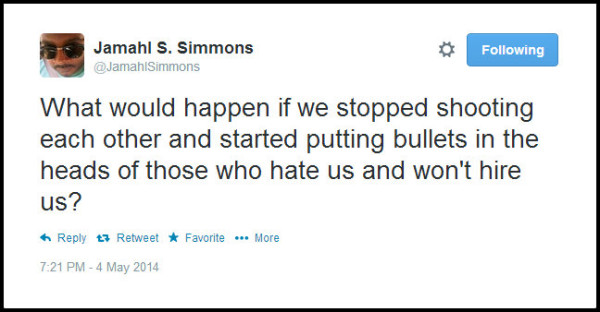 ONLY IN Bermuda:a former expat Canadian ,KEVIN COMEAU now living in California,has the guts to expose 14 yrs of plp corruption. he also managed the Bermuda: Corruption In Paradise blog
understand what caused the Island’s economic collapse

Our Budget time bomb is ticking!
This is right out of the Ewart Brown/ LoisBrownEvans plp/BIU  playbook, lies repeated in Parliament, cannot be sued for defamation Let's see Bean repeat it out of the protection of Parliamentary privilege! Let's go to the tape:any bets the phone call was recorded ?Premier Craig Cannonier would never reveal this,even if it were true ,to the Opposition leader Marc Bean
Premier told me of casino bribe offer — Bean
Premier Craig Cannonier revealed  his business interests were “in severe financial difficulty” and that, once the payment was made, he “would be free from these rich, white UBP boys”, according to Mr Bean.

WHY NO ACTION ON ERAT' FIRING STAFF?Staff who were sacked from Ewart Brown's clinic claim officials are dragging their feet over a probe into alleged intimidation at their former workplace.

Dr Brown: Medical equipment restrictions ‘aimed at my practice’Former Premier Ewart Brown has “no doubt” that moves by Government to restrict the importation of “new, high-cost health technology” are aimed at curtailing his medical business.
Bingo ! Why don’t you start the Erat Brown Bank from the millions you stole from Bda Inc.? And what’s the result of the BIU dispute with the 2 employees you fired?

John Jefferis keeps buying awards from his caribbean slaves ,he  has enough millions looted from Bda taxpayer's ,from plp-Erat brown's thievery, to retire in luxury, as we sink into 3d world misery ,burdened with BILLIONS of plp debt 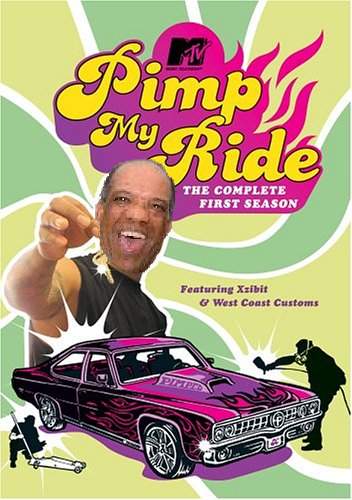 Sandys 360,yet another monument to plp incompetence .

‘stark reality’ of up to 3$billion pension shortfall

Sick pay costs $10 MILLION OF BORROWED MONEY / year:
its a BIU-plp "social engineering" they stacked the civil service with all their supporters,  the same mob who lived  parasitically off hotels/tourism,now have jobs 4 life, nothing managed,no accountability,a free for all, why Bda Inc. is in social/economic death spiral into a Jamaican ghetto .

"Marine and Ports workers complained last week after being asked to bring a private vessel onto a Government slip " It's a shame when their regular goofing off time is interrupted to do a little work.looks like in addition to their 6 weeks vacation and 14 weeks sick leave, the M&P workers want to whine during "working" hours.
The marine Slipway is owned and maintained by the Bermuda TAX PAYER and not the Blood Sucking Government Workers whom produce "NOTHING"
And Government is still borrowing $300 MILLION DOLLARS/yr.to pay the Politicians and Civil Service at a payroll of $750 Million /yr. 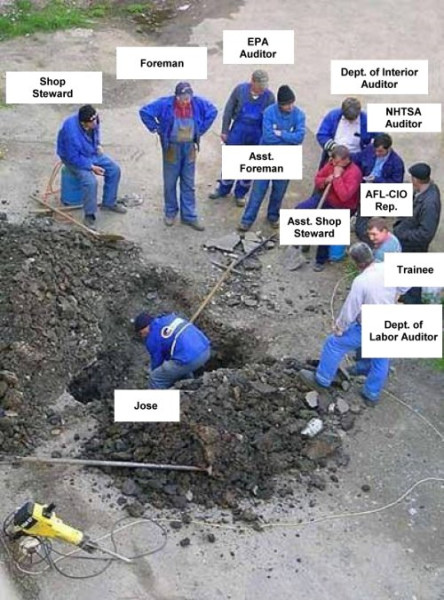 RIOTS THREAT FROM  BIU-plp, George Scott,another BIU ex-hotel doorman,turned politician,like Derrick Burgess. BIU-plp threats & intimidation to start riots , as the city court jesters try to justify their shakedown of taxpayers City Councillor labelled Minister ‘a dictator’
Brock: CoH lawsuit threatens existence of Ombudsman “This is really unprecedented — this is a major, major case that determines whether the Ombudsman survives in this country.” 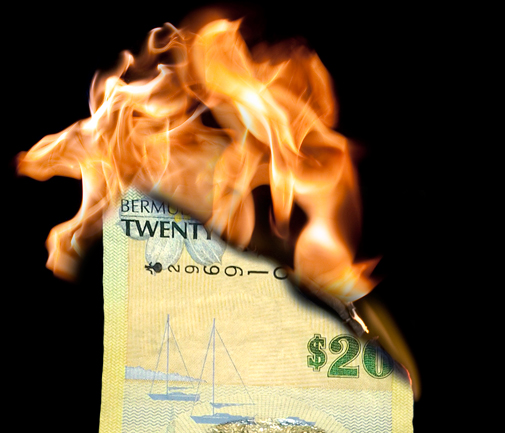 Your tax dollars - gone up in smoke.wastefulness, poor leadership and inefficiency of the public sector

SAGE report: A public sector out of control:Bloated departments and staff benefits, a lumbering and inefficient bureaucracy, a shocking lack of accountability

‘Bermuda is a hard sell’ — Morgan’s point co-owner.
Overpaid pigs at the trough..
Coming to Bda : Detroit's Bankruptcy
UNLESS SAGE IS ACTED ON NOW!!
Bda Inc. already has the same per person debt as Detroit
a result of failed leadership, corruption and over-bloated spending and concessions in the past..The Truth About Detroit's BankruptcyMore whining & moaning from the SAME DONKEY RETARDS that have not submitted Audited Accounts for years!Why are BIU union's financials not reported in a timely and legal manner? AFTER TAXPYERS BAILED THEM OUT OF $9 MILLION DEBT after Cedargate failure? 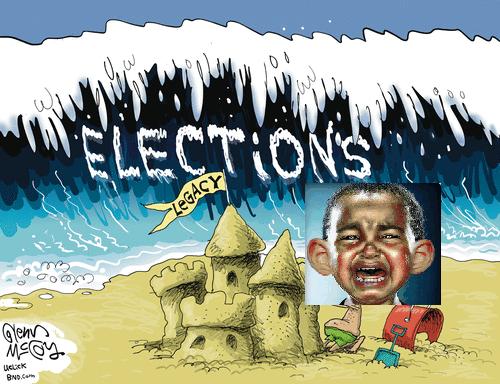 PLP "Somfin fo nuffin " politricks :More moaning & crybaby antics from the same plp donkey retards  who put unborn taxpayers in the chains of debt slavery ,this is all  about "Somfin fo nuffin "  for the most pampered, lazy parasites in Bda Inc.'s 400 yr history. Overpaid, overfed pigs at the trough 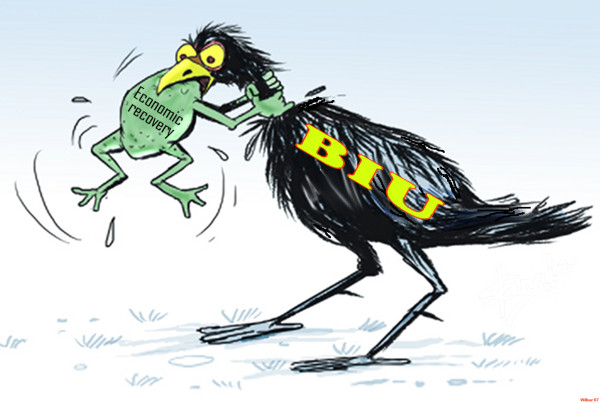 MORE E-RAT BROWN corruption exposed :We are still denied the full facts of this matter and an honest disclosure of who was making the money and why. The fact that it is alleged that senior hospital management are and were involved is why!   HPL awarded themselves a percentage of the amount that they billed for physician services, despite being salaried hospital employees.Healthcare Partners Limited A medical services subsidiary of the Bermuda Hospitals Board was dogged by “serious concerns” since it was created, Health Minister Patricia Gordon-Pamplin told MPs. 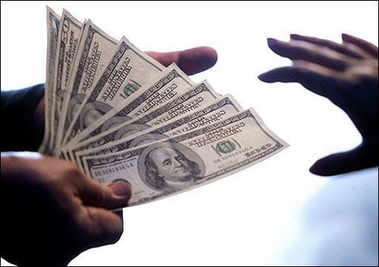 Clinic was farcical battle - SAGE war is next:" with numbers in the way that Bermuda’s National Debt figures are currently being played with is a strong reminder - a too strong reminder - of the kind of subterfuge, shenanigans, and chicanery of the final months of the previous administration.  "
Thieves carry on with impunity :
Minus brains Minors, ex MP Patrice Minors, now a regulatory official with BMA, one of the most incompetent MPS' next to Cog, in the plp's rein of last 14 yrs., still has a big paycheck in her new job at BMAEx-Minister quizzed in court over paid testimony and potential conflict with regulator role
Murderer & thief ,Justis Smith, still free to create havoc Justis Smith, who murdered, tortured & mutilated Becky Middleton, but got off to commit more crimes !
still a busy criminal..Justis Smith fined $1,000 for heroin possession..
:Father of murdered teenager Rebecca Middleton feels let down by legal system. 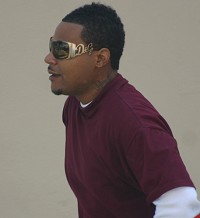 Yet another Black Bermuda jury lets Black  thugs walk free!Three men accused of a home invasion using an imitation firearm walked free this evening, after being found not guilty on all counts.Following a lengthy trial and hours of deliberations, Jerome Mader, 25, Justis Smith, 34, and Tyun Smith-Ming, 25, were all cleared of aggravated burglary and use of a fake gun at a North Shore, Pembroke residence on July 24.

Your dollar is worth less than you think This mess that’s been growing ever since the Seventh Minister for Finance took over in 2003. Now, in 2013, it’s a monster mess,today’s Bermuda Government dollar is an 86c dollar. Not a 100c dollar.
The ex-thief in charge, E-rat Brown, should give back the millions he, and his friends & family stole, along wif de turkeys!
This is what China does to the Muslim Uighurs that E-rat Brown illegally brought here, harming relations forever, meanwhile CHINA INVESTS BILLIONS IN THE BAHAMAS & CARIBBEAN!! Police shot 14 dead  in A Uighur Muslim town

PLP’s  leader Marc Bean to open a betting business!! His silent partner is Ewart F. Brown?
Great plp role model,shows plp family values by exploiting his own followers, de sheeple will waste what money they have left on gambling to enrich Bean & his investors

A tale of cash-sucking vampires ! 2013/14, Public Debt stands at 272% of Revenue. Out of every $100 of tax revenue, the first thing that Government does – and that Government is forced to do – is to send $13.92 out of Bermuda as an Interest payment on its $2,374,000,000 Public Debt. Government then spends the remaining $86.08 in Bermuda on Personnel Costs and Operations and Services.Today’s Government dollar is a devalued dollar.

Frustration and anxiety mar seasonal distribution event: Desperation and anxiety, some senior citizens being pushed out of the way as the doors opened “people are angry, it’s a totally different scene from last year. We saw desperation, “It’s the worst I’ve ever seen and I’ve been here more than 23 years.”. More than 1,400 families signed up for the annual programme..Result of 14 yrs. of plp waste, corruption & stealing !!

As you try to follow the twisted logic of Rolfe Commissiong ,the ex-convict bank robber, ponder the $millions  this Trinidadian carpetbagger & thief  made from taxpayer’s under Erat Brown as “race adviser”

China is  investing $ billions in the Caribbean,building hotels & casinos,but China has not invested a dime in Bda.but Erat has no regrets! Thanks to brown's arrogance and the  unconstitutional & illegal importation of the Uyghurs, and despite Flip Flop's promises & trips to China ,Uyghurs presence here not only angering the Chinese,but also stole jobs from Bermudians
Government must fork over $149m – over $12m a month - in order to  feed the $149m Elephant. wait till interest rates rise.the noose will tighten around taxpayer's necks This Elephant will not go away.Just a matter of time.
Tags: corruption, ewart brown, oba bermuda, plp bermuda
Subscribe
Comments for this post were disabled by the author